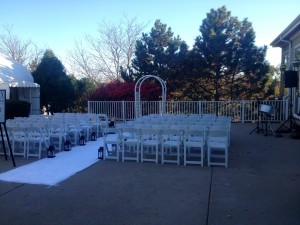 Who would have thought that late October would allow for a beautiful outdoor wedding? Not me! However, last weekend I found myself enjoying nearly perfect weather while performing the ceremony and cocktail hour music for a wedding in Carol Stream, IL. The wedding was held at Klein Creek Golf Club, and I don’t think anybody could have predicted the great setting almost a year ago when we started working on this.

At that time, the bride said there was a chance that I would be outside and even though we worked through those details, I didn’t really think that plan would come to fruition. Upon arriving at Klein Creek, I was able to quickly unload and get set up. This allowed me plenty of time to do some sound checks with my new speaker (EV ZLX-12) and iPad setup. I happy to report that the new speaker is great and the iPad system is phenomenal! I am working with the developer of a program called Calypso Score and couldn’t be happier with it! On top of the name being a convenient coincidence, the program and programmer are great! The program has done just about everything I can think of wanting it to do and the few things that it doesn’t the programmer is working with me to implement! I have started using the iPads almost exclusively and can’t believe at how much simpler some gigs have become. Not having to carry around bulky binders filled with paper music, has allowed me to bring even more music to performances and has even opened the door to on the spot requests!

All in all, the wedding was great, the new equipment was great, and the weather was unbelievable! Thank you Dana and Tony for having me part of such a special day. It was my honor to play music for the bridal party and the bride during the ceremony (by the way, Wagner’s “Wedding March” aka “Here Comes the Bride” sounds incredible on steelpan!) and for all your guests during the cocktail hour.